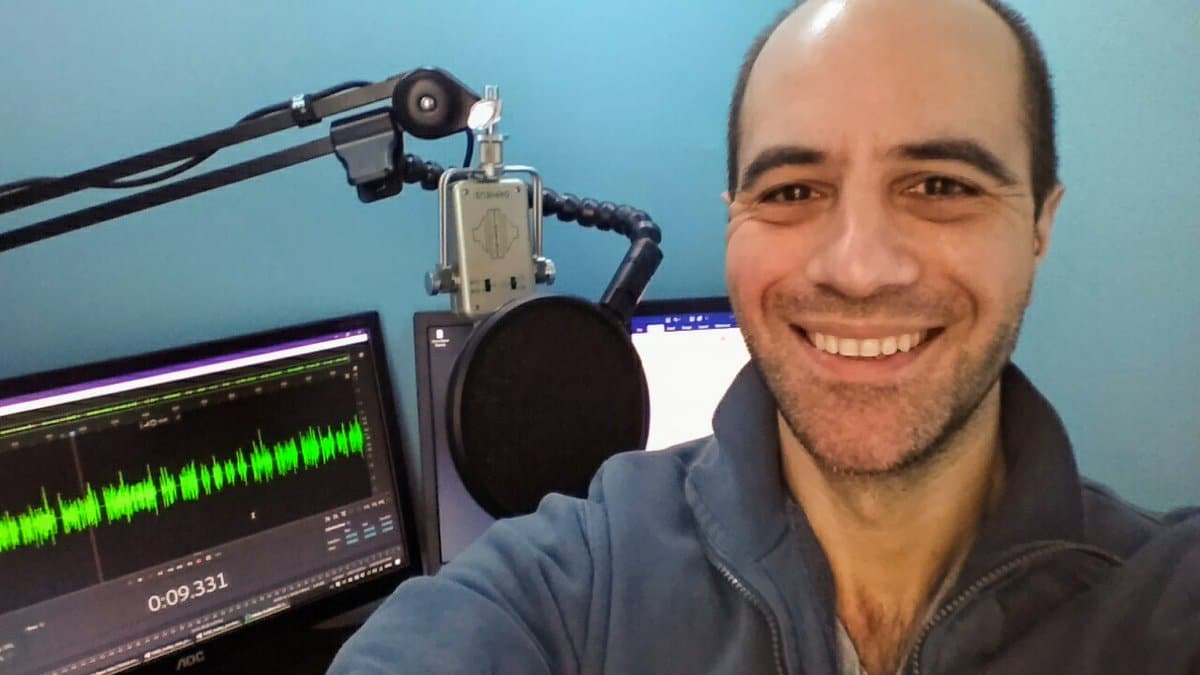 We started the episode by introducing our guest for today’s podcast, Philip Chryssikos. Philip has a European radio award winning and Radio Academy nominated journalism career. It spans in stations such as Capital FM in London, Capital Gold, XFM, Smooth Radio, BBC London, talkSPORT, BBC News and in 1996 he was approached by capital radio in London to join the award winning lifestyle and current affairs program The Way It Is. He’d been with Capital Radio for 9 years presenting many music program service and on air personality as well as doing the journalism on Capital Group stations including 95.8 Capital FM in London. He lectures in radio journalism and presentation in colleges and universities and his voice is regularly used for commercials, station imaging, corporate presentations and others.

In 2004 Philip was approached by UBC media to become managing editor of Entertainment News. They supply rolling showbiz content to commercial radio to some of the biggest groups in the UK including Bauer GMG, UKRD and UTV. I asked Philip what he enjoys doing most out of everything I mentioned. He answered that coaching his team is what he enjoys most because he feels very privileged to have trained a very good team of radio journalists who are now true multimedia journalists who can do radio and also online video.

Diversifying From Radio By Philip

Izabela first provided us a background of what Philip does for those who may be unaware. She shared that she hears Philip all the time on the radio every time there’s an entertainment segment, current affairs and TV shows. Philip actually produces these great segments and supplies some of the biggest digital websites with showbiz content. Izabela then inquired to Philip on how he diversified what he does in radio to what he currently is doing. Philip told us that about 4 years ago there weren’t many sites doing what he did. He also shared that he didn’t just approach radio stations but also companies like Yahoo! and Heat Magazine because these are companies who really want to take their text offerings and make them to video as they understand its importance.

I also asked Philip, being the managing director that he is, on whether he would also repurpose content for some of the biggest digital publishers. He answered in the affirmative but distinguished their difference from other content companies who have their online, radio and other teams as opposed to their single team who does everything. He elaborated that they first get all the radio content but they also video everything they do and then filter out what is great for video, for online, for audio clips or radio. He explained further that what is great for audio will not be so good for video and vice versa.

I commented on how well produced everything Philip creates, from the music to the transitions to voice overs, and asked him on how he attains the high production value and how he preaches his team on maintaining it. Philip said that he always tells his team that they’re in one of the best jobs in the industry and to remember that every radio station, no matter how small or large is trying to sound big to bring in the audience and advertisers, so they have to sound great. He elaborated that everything must blend together and that no matter what station you are on, they use the idea of white labeling to roughly put their brand and make it appear as your own entertainment news such as Isle Of Wight radio station Entertainment News instead of their entertainment news.

Izabela voiced out her interest as many others’ of getting Philip’s content and asked how it works and how to get his content to radio stations and even internet broadcasters. Philip stated that their content reaches about 10.5 million people in the UK and 2 million in London as they supply every commercial radio station in the UK apart from the Global Radio Group. They have big rolling 3 year deals with all the radio groups for commercial radio which is funded by pre roll or post roll advertising. They would then go to the big advertising agencies and lay out their entertainment news, targeted listeners, time for airing and they get advertisements from there. For internet radio, Philip said that they sell it for a competitive price rate. Philip also gave out some tips such as going to local advertisers to sponsor the Entertainment News, the cost for an internet or community radio station may easily be recouped.

Can Entertainment News Make Money On Its Own?

I asked Philip if he thinks Entertainment News can be a stand alone product, outside of media networks. He answered yes, and explained that what he diversified into the video side will not to be reliant on the radio industry whether its on the UK or around the world or whether its on terrestrial, satellite, or digital platforms but to be more reliant on other platforms such as video instead. He even shared with us that he could even launch an Entertainment News radio station which has been a plan that he’s started working on 2 years ago. He also said that it has to be a station with a difference by tapping into archives from even 18 years ago including tapes from Paul Simon’s Graceland album, how it was made, Michael Jackson’s Pepsi Cola documentary from 1992 and others. He said that the entertainment news and music may be aired during the day, with the documentaries airing at night because he believes that successful radio stations always get their ratings during the day and their credibility at night.

Philip also shared with us that he just went into a meeting with a huge American company who are now in the UK and are looking for partners for content and will not use HD technology but 4K which he says is the new version of 3D. He even talked about up and coming trends and diversifying and speculated that come Christmas time, you won’t anymore be able to get a phone plan in the UK which does not offer 4G.

I asked Philip on what tips he can give to an Internet station or an outlet owner who would like to access celebrities and get good content for his or her own radio station or podcast and how easy or difficult it is to do such things. He answered that it’s not easy but also said that it can be done as where there’s a will, there’s a way. He shared that they get content by getting in touch with the PRs, chasing stories as they happen around the world, with journalists carefully curating them. He also said that it can start from just following celebrities’ Twitter and Instagram accounts and keeping track on them. Then, from there you can follow the fan sites, see where they are, the promotions they’re doing, and just get in to a situation like someone who wants to get autographs. He also said that it would be helpful to increase your connection not only to those who are directly involved to the stories but those that may be indirectly involved in a second, third or even fourth degree.

Philip’s Most Interesting Encounter With A Celebrity

Izabela asked Philip on what his most interesting encounter with a celebrity is. Philip answered that it has to be with Phil Collins. He shared that they went to the same grammar school in Chiswick in West London although at different times. He had an opportunity to go into Phil Collins’ house in Switzerland and interview him which he says went very well. After 2 years, he again had an opportunity to talk to Phil when Genesis reformed in London wherein Phil told him that he remembered him.

Izabela asked Philip if he has considered a podcast as a way to distribute the content be it free or paid. Philip said yes, and it can be done easily as they have done before with Audioboo (or audioBoom soon to be) but also cautioned that he also had to look out for the clients who are already subscribers mainly their big name clients, because they might not be as willing to pay for content which others get for free while they have to pay for basically the same content. So he says that you have to protect what you are giving away for free. Philip also told us that one way to go over it is to stagger the content by 48 hours and then offering it for free from there.

How Entertainment News Use Social Media

I asked Philip how they use social media in entertainment news not only for discovery of stories but also as their digital strategy. Philip said that they use social media mainly for following the celebrities and the MPs (UK Members of Parliament) for news and following what they are doing and how they are doing it. Philip says that the digital age has changed the way how celebrities, to news outlets, to sports stars and everyone else do things because instead of making a press release, publicizing with an agent, they can just post it on twitter now. He cited as an example on how Katy Price announced statements about her marriage on Twitter.

He also shared that if you hashtag your post properly, even if you only have 5 followers, it will still reach the people who are looking for that hashtag. I also shared a story about jingles when Nick Grimshaw took over the Radio 1 Breakfast Show and I tweeted at the right time, it ended up with a Guardian journalist asking me to give a statement about the tweet.

How To Get A Job At Entertainment News

I went on asking Philip on what qualifications are needed at Entertainment News and on whether they have a vacancy at the moment. Philip said they do have a vacancy and outlines the basic requirements of having first and foremost broadcast radio experience and knowledge of broadcast laws and having the passion to do what they do. When asked about the location of the vacancy, Philip told us that they are based in London but as long as you have a passion for doing news journalism and you know how to write a strong story they can work with anyone, anywhere in the world.

For details you can visit their website at Entertainment News to contact them and check out what they’ve done as well as information on current vacancies in Entertainment News. Philip also shared ways on how you can reach him like his Twitter, LinkedIn and Facebook. Philip welcomes emails, tweets and ways of contacting him and promises to take the time to look at and reply to all of them.