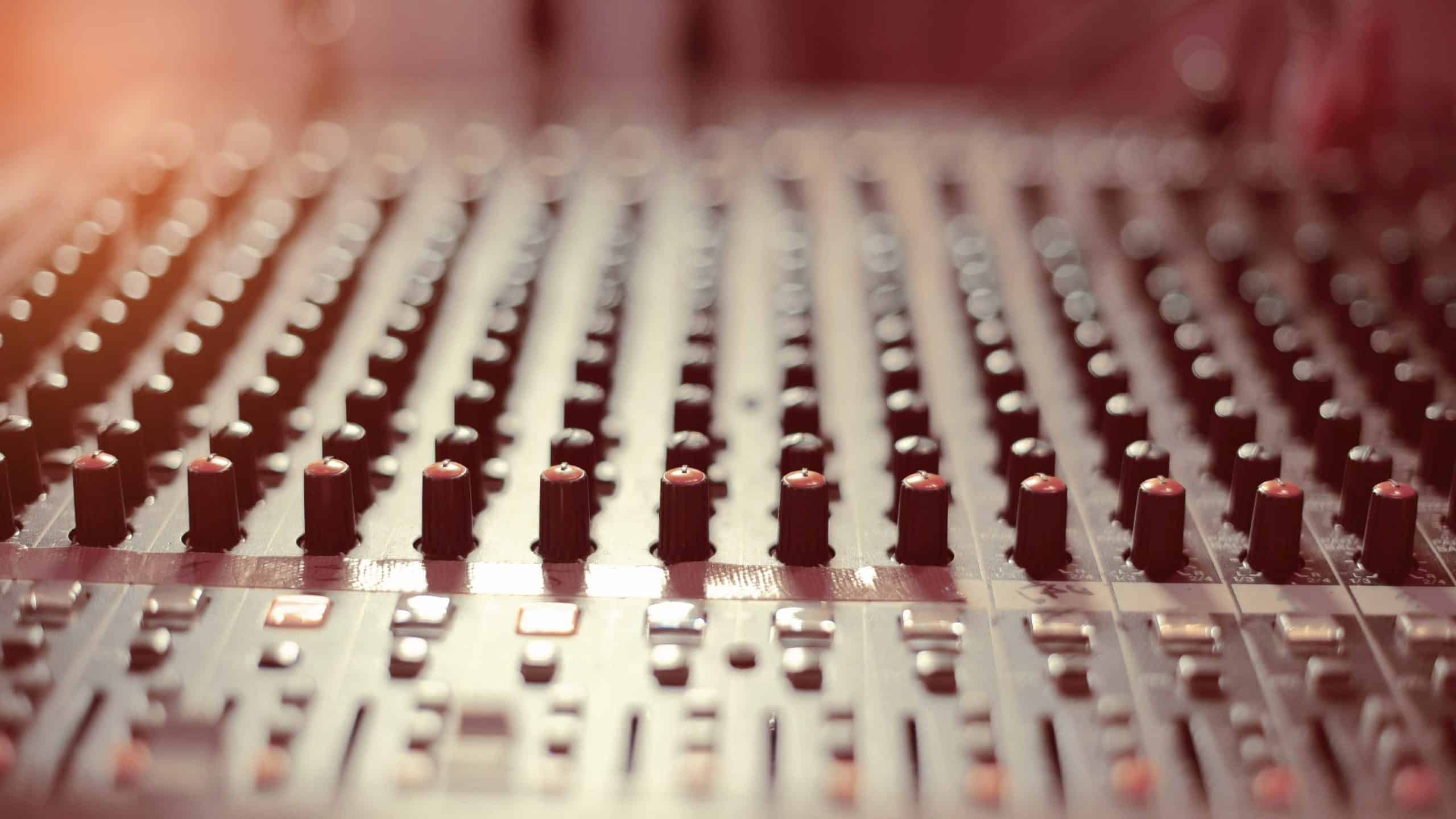 In this episode we talked about mixing desks in general. It’s Izabela’s idea to tackle mixing desks and their current trends and possible use in this day and age of advanced technology.

What Is A Mixing Desk?

We started the episode addressing a question by Izabela by shedding some light on what a mixing desk is and why it was created. It’s simple, a mixing desk was created to mix audio on a desk which has faders. The fader is a little piece of plastic (or metal of you have a luxury edition) that you move up and down to increase or decrease the volume of a certain source.

So, you might have a mixing desk with 6 channels. The channels may be microphone 1, microphone 2, a feed from the radio station news service, or a feed from your computer, a telephone or Skype among others. In a mixing desk we also have the following; knobs that we can twist to change the EQ (equalisation) low frequencies, mid or high, the gain which turns the volume of the source up and down, pan from left to right, and on really advanced radio station mixing desks AUX sends and REC sends for recording to other audio sources.

Will The Mixing Desk Become Extinct?

Izabela asked me about the need for mixing desks nowadays. Is there a use for mixing desks now that we have different applications and the like? I opined that mixing desks are not as useful nowadays and that they’re bound to become extinct in the future. This is primarily because most of what you need to do can be done inside a computer.

We discussed a good reason why I believe mixing desks are not needed anymore. This is because you can actually have a dedicated computer to serve as your mixing desk, whether it’s a Mac, PC, or even a tablet. It will be less clunky, can provide you with more functionality and usage, and may even turn out cheaper. In the UK, for instance, you can get a Tesco Hudl with the latest version of Android OS, install an advanced mixing desk on it and you already have a virtual mixing desk which will not fill up most of your workspace and can be used to play Plants vs. Zombies once you’ve finished your work! So you’ll only have to spend less than a couple of hundred bucks on a relatively decent Android tablet and a few quid for a good mixing desk app.

Izabela shared her opinion on why she thinks a mixing desk may still appeal or have their use for others. She believes that it may be good for live broadcast. On a radio station where you have callers and an operator, a mixing desk may be more appealing. However, Izabela further stated that it’s still a matter of getting used to because you can actually do all those things digitally if you have good enough mixing desk software.

Izabela posed an interesting question of whether you can put multiple inputs using a virtual mixing desk on an iPad. It’s interesting because on an iPad you only have one way in unlike in a mixing desk, potentially limiting the inputs. Our friends at i-jingle app are actually trying to create an app that can deal with multiple inputs and sources of sound, bring them all together into a cart wall style app with functionality for faders as well.

I also shared my recent experiences using mixing desks. When I used my mixing desks I wasn’t able to use it to its full advantage because I was only using it mainly to fade up and down my microphone. My last full time usage in 2011 was playing jingles and fading up and down the music on commercial radio. It was useful because being in radio then I needed control over multiple audio sources. However, if you’re more forward thinking you can be like Global Radio in the UK – Capital Radio I believe actually have a whole set of digital mixing desks in their studios.

The Use Of Mixing Desks for Podcasters

We also talked about how mixing desks may be used differently and efficiently by different podcasters. Izabela summarised her thoughts so far during the podcast. She pointed out that if you are pre recording your content, a manual mixing desk would probably have even less of a use because Adobe Audition can take care of pretty much everything. I added that other podcasters like Cliff Ravenscraft like to do their podcasts there and and then and mix in multiple music beds and voice calls with little post-editing even though the podcast is going to play back at a later time. I believe that it works well for the purpose and is beneficial for that matter. Izabela on the other hand voiced out her opinion as a podcaster that if you don’t have to have a manual mixing desk and you want things easy, you don’t need it.

The Secret Of Complicated Mixing Desks

I shared my thoughts about the secret of complicated mixing desks. A mixing desk looks very complicated with all the buttons, lights and controls but you only really use a couple of things. Izabela half jokingly asked whether someone can use every single button and utilise the whole of a mixing desk in one production. I’ve actually seen videos of radio DJs doing this!

Izabela and I further discussed the factors that you might want to consider if you think you need a mixing desk, basically, the possible advantages and the apparent disadvantages of getting a mixing desk.

One argument for not having a mixing desk is the fact that many audio platforms are now designing their own digital mixing desks. Spreaker, the platform we host this podcast with are working constantly on improving their live mixing console which will allow you to bring multiple inputs and even perhaps effects or EQ in the future.

Another one is when you pay for a mixing desk you’ll also pay for the amount of channels you want but you’ll always find that there’s a few useless that you don’t really need. In my experience, I bought a Behringer mixer, and it had vocal effects and 8 bit quality mono sound effects which I’m never going to be able to use in real life production. The vocal effects, while you can add loads of reverb or echo to your voice in real time, I’m not really going to be able to use it in a live environment for my tasks.

Izabela added that digital mixing desks are much more likely to be updated regularly unlike with a manual mixing desk where you’ll basically have to buy a new one if you want to upgrade. And taking into consideration how fast these things progress, going forward with the digital versions would be far more beneficial.

We also spoke about how mixing desks can be beneficial for audio producers because they can automate a process when they’re creating a promo or similar. Sometimes people will say that its just not the same when you don’t use a physical fader because you can’t really feel how you’re moving the music up and down.

Mixing desks do have good features that will allow you to do things in real time, but to answer the question of whether or not you need it, the answer is no. I have a feeling that mixing desks will go the way of the cassette tape and the compact disc.

If you’re using a Mac you should look into soundflower and also LadioCast. Two excellent free apps I use all the time to do real time mixing.

What Are Your Experiences With Mixing Desks?

Do you use a mixing desk? what is your experience with it? Would you consider going entirely digital? Leave a comment on this podcast episode and tell us your opinion.

Also, if you have a mixing desk and you’d like to share your photos with us, we’d love to see them on Instagram or Twitter, put the hashtag #helloMRC and we’ll be sure to respond to that.